Of all quackeries, cancer quackery has to be one of those with the greatest potential for harm.

We’ve seen stories of people being bilked out of their savings, people pretending to have cancer to sell a story, and what seems like a never-ending stream of new “miracle cures”.

I don’t blame the general public for wanting to believe that there’s a simple, cheap, universal cure. Cancer is scary. Even though our understanding and ability to treat cancer with modern medicine continue to improve, we have a long way to go. Some people, sadly, won’t make it. When people have little hope they will reach out for any crumb of comfort, which is totally understandable. 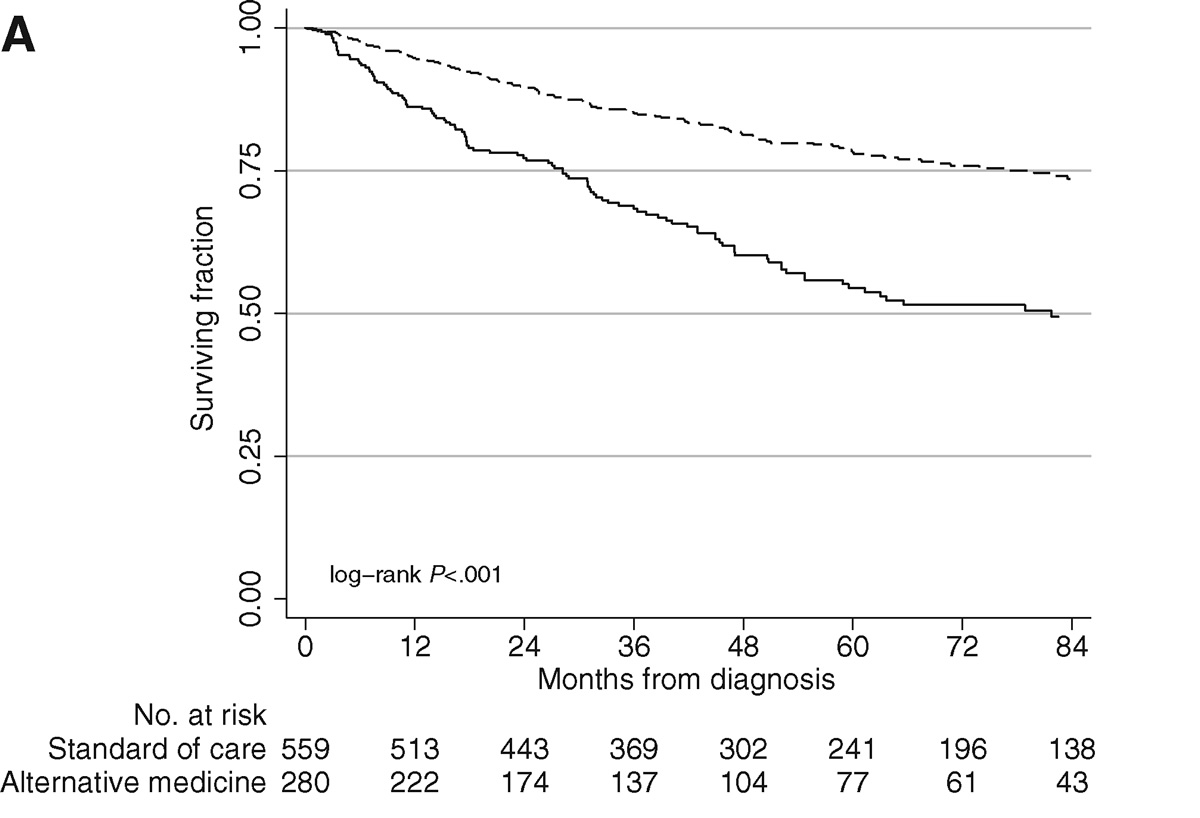 The story so far

“The Truth About Cancer” is a “documentary” series and associated website promoted by Ty Bollinger.

The series has already been widely debunked, so I won’t spend too much time going over old ground. Despite that, the series and associated products have been very successful, with the YouTube channel alone amassing nearly 100,000 subscribers and millions of views.

A good example of someone taken in by the series is Carissa Gleeson, a young woman suffering a difficult-to-treat cancer. While seeking anything that would give her more hope than the 50-50 she received from her oncologist, she found Bollinger’s series.

Thankfully, her story then takes a more positive direction. On finding that the alternative treatment wasn’t working, Gleeson was told to go back to conventional medicine, which did help. A look at her Instagram feed shows she recently got married.

Gleeson avoided the worst case scenario, but the time she spent pursuing alternative treatments could have cost her dearly. Other people may not be so fortunate.

You may be thinking there could be no way for a cancer quack to sink any lower. Unfortunately, you would be wrong. 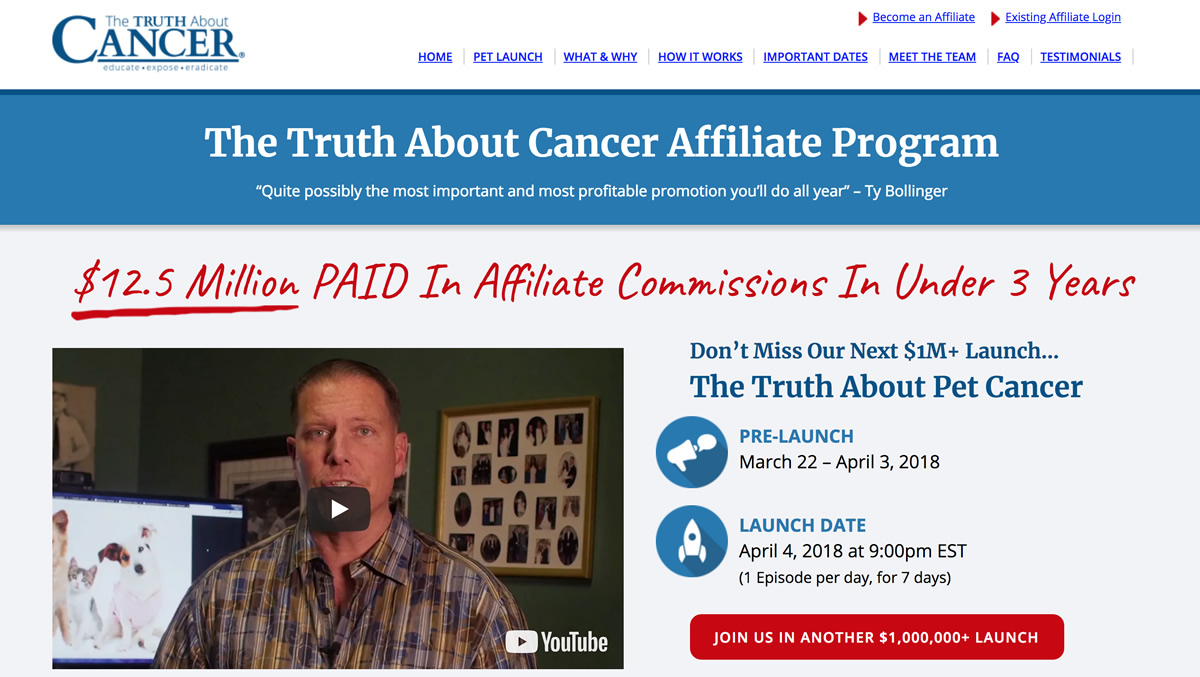 The Truth About Cancer affiliate site

“The Truth About Cancer” is an affiliate scheme. It’s slick, well produced and boasts of paying out over twelve million dollars in commission. According to the site, affiliates receive “50% commissions on all digital products and 40% on all physical product sales […] and 25% on any upsells”, so the creators are making at least the same amount but likely far more.

Bollinger is now promoting a sibling series aimed at pets. The website offers all the hard sell and helpful resources you’d expect from any other sales scheme, even providing boilerplate text copy for affiliates to use on their websites. The affiliate-coded links are automatically added, so “partners” merely need to copy and paste to start promoting the series and earning commission.

The topics discussed include supplements, “superfoods“, homeopathy, vaccine scaremongering and even “why heartworm pills don’t work [and] the safe, natural therapies to use instead”. 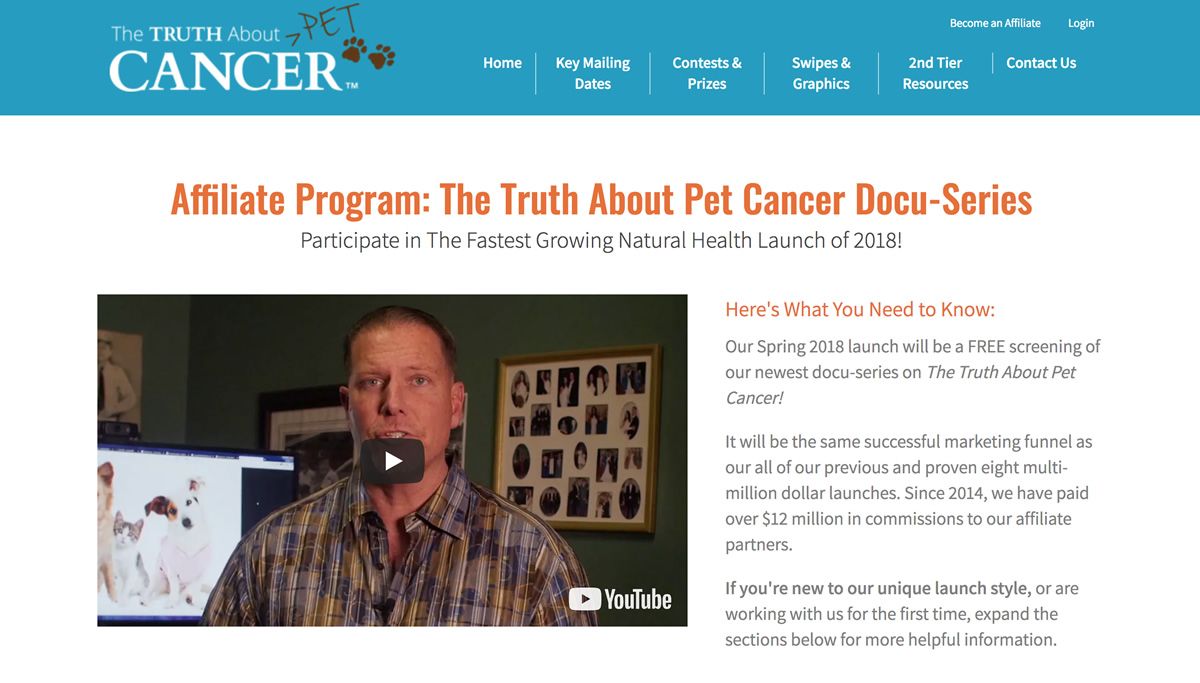 The risks of people choosing unproven alternative medicine over conventional treatments are likely similar for pets as they are for humans – wasted money, unnecessary treatments and missed opportunities. Again, people may end up losing beloved pets earlier than they would otherwise.

What makes the scheme even more distasteful when applied to pets is the issue of informed consent. If an adult human decides to follow an alternative path, that’s one thing. But pets can’t make those decisions. They rely on us to do it for them. They can’t communicate with us in the same way, so may end up suffering longer than necessary if, for example, a treatment is painful or their symptoms are worsening.

We all want the best for our pets. Nobody wants to see an animal suffer for no good reason. We want them to live long, happy lives. Bollinger’s scheme will seek to exploit that love and use it to foment fear in order to make sales.

“The Truth About Cancer Pets” launches tomorrow (April 4th, 2018). The website lists existing partners including anti-science campaigners Sherri Tenpenny, Sayer Ji of Greenmedinfo and March Against Monsanto. These people have large followings and will likely be sharing the scheme widely in order to gain commission and compete for bonuses. The campaign will potentially expose huge numbers of people to this misinformation for profit.

A persistent narrative in alternative medicine is that conventional medicine is purely a profit-making scheme. The conspiracy theorists claim that a cure already exists and is being covered up. People who speak out against these harmful claims are labelled “Big Pharma shills”.

So it is bitterly ironic that many of the people sharing this campaign are doing so to fill their own pockets. Of course, some of them may be true believers, who actually think they are helping, which just adds another layer of tragedy to this sorry tale.

The truth about “The Truth About Cancer” is this – it’s a way for quacks to make money from vulnerable people. A cold, heartless wolf in “caring, holistic” sheep’s clothing.